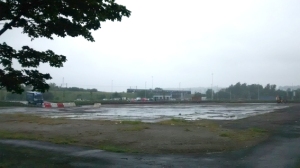 The Elland Road Park & Ride Scheme, 10am on a Friday. There are some cars on the far side if you look closely.

I was kind of glad when Leeds City Council finally admitted that Beeston residents wouldn’t get anything out of the Elland Road Park & Ride scheme which has been thrust upon them. But it turns out they are wrong. There is something very tangible in this for local residents: cheaper travel into the city centre.

If you catch one of the First Bus services along Elland Road you’ll pay a standard £2.10 into the city centre. Day tickets are available but these are still more expensive than the standard £3 ticket on offer from the Park & Ride. And up to three children can travel free from the Park & Ride when accompanied by a fare-paying adult, whereas First Bus will charge over-5’s half-fare, which explains why the lady with the two kids who gets the bus at the same time as me always hands the driver a tenner for their collective fairs.

Before local residents get in their cars and drive over the road to the Park & Ride to take advantage of the cheaper travel they should note that Metro have confirmed that customers don’t need to drive a vehicle into the Park & Ride to use the bus service. Residents may want to think of the service as “Walk & Ride” instead.

Not only are the fares cheaper at the Park & Ride, but you’ll also get to travel on a new bus and have a seat because very few people are using the Park & Ride. The photo above was taken at 10am today (a Friday) when you’d expect it to be full of commuter cars. It is early days of course, but perhaps the poor location of the site – as repeatedly pointed out to the Council, including in an expert report they themselves commissioned – is proving to be an issue.

It might also be related to the Council’s insistence on linking the Park & Ride with Leeds United – their city centre adverts say “Park and Ride and Shoot into town” with a silhouette of a stadium in the background – even though the Park & Ride is closed on match days.

The Council also made the false link between Leeds United and the Park & Ride in their consultation response to residents in which they said, “The park and ride service at the Reading Madejski Stadium allegedly attracts supporters to arrive early and go into town before the match so park and ride here [Elland Road] could also make some contribution to reducing the match day congestion.” After some discussion they admitted that their Madejski Stadium point was entirely based on a comment from “Mark a Portsmouth Fan” on this football fan website.

I asked if the Council’s research showed what it was that Reading fans were heading into to town for before the game – a pre-match pint perhaps? There are plenty of pubs near Elland Road stadium so there is no need for people to travel away from the stadium for a drink. Leeds United fans will be pleased to know that the Council jumped to their defence by misinterpreting my point and saying, “We would be stereotyping all football supporters if we were to assume that all they did was to consume alcohol.” But what to think when the forum that the very influential “Mark a Portsmouth Fan” frequents says “Pubs near the Madejski stadium are rare, so most fans have recommended Reading town centre for a pre-match drink”? All of this is of course irrelevant because (drum roll, fanfare, fireworks)… the Elland Road Park & Ride is not open on match days. 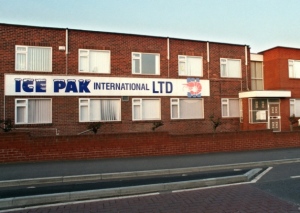 In late 2013, hundreds of households across Beeston in South Leeds received a leaflet headed “Beeston Campaign for Affordable Homes [BCAH]” encouraging residents to object to the proposal by Aspiring Communities to build a community centre on the former Ice Pak site on Barkly Road. Is the “Beeston Campaign for Affordable Homes” a genuine campaign group? And if it isn’t, should people be concerned about the influence BCAH might have on the final planning decision which is expected within the next two weeks?

So, what is the “Beeston Campaign for Affordable Homes”? Unlike most campaigns, it has no online presence. But here’s what I found out:

I have contacted Dr. Birch twice since the start of the year having been told by an intermediary that he would be happy to answer my questions about his campaign. He has not responded to date, including to the last letter which he signed for in early February. In the letter I asked him about the purpose (in addition to opposing the Ice Pak development), history and membership of the Beeston Campaign for Affordable Homes. I also asked if there was an opportunity for local people to get involved in the campaign (in addition to objecting to the Ice Pak development) and whether the campaign had any links to other affordable housing campaigns such as Hands Off Our Homes (Leeds). Finally, I asked Dr. Birch what he thought the chances were of affordable housing being built on the Ice Pak site should the Aspiring Communities proposal be rejected. Steve Williamson had previously suggested the affordable housing issue was a red herring.

All of this suggests it might be more accurate for the “Beeston Campaign for Affordable Homes” to be renamed “Dr. Birch’s Campaign to Stop the Ice Pak Development”. But what about the planning process? Could an individual have more influence on the process by presenting themselves as a campaign? The information that Leeds City Council’s Planning Team gave me about the process suggested to me there might be two ways that BCAH, as a “campaign group”, could exert more influence on proceedings than individual members of the public could.

Firstly, the views submitted by the BCAH “Honorary Secretary” could be separated out from those of the general public in the planning report which the Planning Team will present to the South and West Plans Panel for decision in the same way that the views of the  Beeston Community Forum and local ward members will be separated out. We will need to look at the actual report when published to see if this happens. Individuals who signed copies of the BCAH leaflet or the petition version will likely have their responses summarised by saying xx number of respondents signed a standard letter/petition agreeing with the points in the BCAH leaflet. But the report shouldn’t give the impression that these people are part of the BCAH campaign, and the Planning Team were keen to stress it is not a numbers game.

The second way that the BCAH “Honorary Secretary” might exert more influence than a member of the public is if any of the Plans Panel members (see picture below) or other attendees use the BCAH “campaign” to imply that a ‘group’ – which might be perceived as being representative or having relevant expertise – objects to the proposal. While neutral residents will hope that the  Plans Panel makes a decision based on the facts, it is ultimately up to each individual councillor to choose their words and tactics during what may well be a highly charged meeting.

The Planning Team are aiming to take the final report to the panel on 3rd April, but this is to be confirmed by the Chair, Councillor James McKenna.

Good news. Leeds City Council’s Executive Board, which meets on the 6th November, are recommended in this report not to progress their proposals to charge for residents parking permits. I hoped this might be the case, but could not be sure, as discussed earlier here. END_OF_DOCUMENT_TOKEN_TO_BE_REPLACED

Coming soon to LS11? Leeds City Council’s plan for a nuclear reactor. “It will rejuvenate the local economy”

As reported on the Leeds Citizen blog, Leeds City Council has now approved the Elland Road Park & Ride Scheme despite strong opposition from residents and some councilors. In my view, the Council has chosen to take the easy option for them by approving a scheme on land they own and which is vacant, rather than pursuing a scheme which would require more work but would, ultimately, be far more beneficial to Leeds, and far less damaging to my community.

Now the scheme has been approved, it is up to local residents (including me) and local councilors to try and hold the council to account for their decision if the things local residents were concerned about become reality.

I asked Leeds City Council some questions about the scheme back in July. In their answers they made some clear predictions that certain problems would not occur. I was only partly convinced on some issues, but let’s see. They are committed to conducting an impact study 12 months after the park and ride opens, and issues can be raised with their traffic management section. A summary of what they told me is below (my emphases in bold). END_OF_DOCUMENT_TOKEN_TO_BE_REPLACED

Since my last post (Eric Pickles vs. Leeds City Council vs. My community) on Leeds City Council’s disingenuous proposals to charge residents to pay to park outside their own homes, Leeds City Council have confirmed to me that any charges “would be introduced in accordance with the Road Traffic Regulation Act 1984 Section 46”. It was Barnet Council’s attempt to raise charges under this act that was declared illegal by the High Court because “the 1984 Road Traffic Regulation Act is not a fiscal measure and does not authorise the authority to use its powers to charge local residents for parking in order to raise surplus revenue for other transport purposes”.

So it would seem clear that Leeds City Council’s proposals to raise income by charging residents considerably more for a service than the service actually costs are on the rocks. However, it is worrying that LCC were considering the implication of the Barnet ruling before July 29th and they still haven’t dropped their plans. There might be a delay before the Executive Board can formally make a decision later in the year, or perhaps LCC are going to emulate Barnet Council who continued with the scheme even after they knew they were going to lose the court case? As described on the Barnet CPZ website, Barnet Council “wasted over £100,000 in legal costs, carried on claiming unlawful parking charges for nearly two years knowing it would have to refund residents, and put campaign member David Attfield under huge stress while he fought them in court.”

There is some truth in Eric Pickles argument that local councils can work better to deliver services without raising the council tax. But the reality is that communities are now left to organise and fight the budget cutting plans of councils who are ill-equipped to think and work in radically different ways to maintain services in non-conventional ways. We’ve seen this with the library and sports centre closures where communities have come together to try and run the services themselves. The communities have not done this in partnership with councils, but in reaction to clumsy traditional cuts programmes. The process goes something like: 1) identify service that could be cut, 2) “consult” with the local communities (a legal requirement), 3) tailor cuts to pay heed to consultation (“we listened”), 4) implement cuts. Councils would do well to read the new Surviving Austerity report from the New Economics Foundation. Eric Pickles would do well to take more responsibility for helping councils manage the impact of his cuts on local communities. END_OF_DOCUMENT_TOKEN_TO_BE_REPLACED